I often have ideas that just don’t work.  Something that I find really hard to do is let go of the thing once I see that it’s not working (piles of unfinished projects residing in the closet of crafty delight are testament to this issue).  But stepping away from it for a while (some times years…sh.) and coming back from a new angle can make all the difference (maybe, kinda, sorta, sometimes).

When my sister was here she had come up with this crazy idea for a hooded scarf.

We worked on it quite a bit.  We had lots of silly fun, then abandoned the project when all the work we put into it looked as though we hadn’t done anything at all.  This week Something different started developing in my brain and I spent some time looking at pictures of hooded scarves on the google thing.  I realized that where we were going wrong was in trying to keep any semblance of the old sweater in tact.  There was too much fabric in all the wrong ways.  So With that in mind I pulled out the green sweater you see my husband modeling in the picture above and went at it with the scissors.

The reason Sis and Husband are wearing different failures is because we liked the green sweater better and didn’t want to ruin it by using it for our test run.  This was a good call.  But when I started digging in the closet of crafty delight for the hooded scarf project revisited the only one left was the green one so I decided to forgo the test run and sacrifice it on the alter of hope and good ideas.  So I got my scissors out and showed no fear!

I cut the sweater into it’s obvious parts then refolded the body part so that when I cut it into the hood shape the pattern would be centered on my head.

I cut open the tube that was the body of the sweater so I had one big rectangle folded in half and inside out. I pinned right down the back so that I had a piece closed on two sides at right angles to each other.  Wow.  Did that make any sense at all?  When I stuck it on my head it looked like just what it was: a folded rectangle stuck on my head.

And since we are talking about stuck….a note about pins and trying things on.  Pins are an important tool when you are sewing.  They will help you do all kinds of things that fabric would refuse to do without them. But make no mistake about it THE PINS ARE OUT TO GET YOU.  Given the slightest opportunity they will attack.  Do not even entertain the thought that you will try something on with the pins on the inside.  Not for a second! Not even if you know full well that the pins will be a good foot away from your body.  They will seize the moment and hurt you in your most tender parts.  Pin cushions are a necessity! Those little plastic boxes your pins come in when you buy them are so cute…remove the pins (carefully) and use them for your earrings or something. Those pins have been sitting in the box for months on the craft store shelf waiting for you to open the lid on their escape plan.  Get them all into the pin cushion fast and then never turn your back. As soon as you aren’t looking they head for the floor and from there they’re going after your husband and that is never pretty.

Yes.  I tried the hood on with the pins on the inside and, yes, even though they were at least three inches away from my head they attacked.  So, sorry no picture of me with a rectangle on my head.

It became clear that a hood has a shape all it’s own so I took the hood off my rain jacket and used it to figure out what that shape should really be.

At first I thought I would want the ribbed part to stick out in front of my face a bit but after checking out what I looked like in the rain coat hood I decided to cut pretty close to the size of the original.

I look so unhappy

I pinned around the original hood, sewed a straight stitch along the line and cut away the excess.  Notice I didn’t cut around the curve at the bottom.  A mistake that will be rectified later.

I REMOVED ALL THE PINS! Then I tried it on again

I still don’t look very happy.  But the hood is better.  It’s a bit long but I know I’m going to want that extra length to attach the scarf part to.

There’s too much fabric in the back….worry about that later.  On to the scarf part!

I knew that the sleeves wouldn’t be long enough to make the whole scarf but it was a good place to start so I cut them open and cut out the seam then pinned them to the hood.

PINS ON THE OUTSIDE!

The full cut open sleeve is just too much

I trimmed the sleeves down to a more reasonable scarf width. While I was at it I dissected the parts of the sweater I wasn’t already using.  I cut everything away from the seams and ended up with a bunch of odd shaped pieces which I also trimmed,

then sewed all the little bits together into two roughly equal sized scarf halves.

TANGENT:  I love upcycling! I love seeing all the weird and wonderful things that people come up with to make from stuff that came before.  As with all things there are fashions and styles and such, ways that things get made.  One thing that I pretty much always hate, is the seam on the outside thing.  I will say that I have seen a few items on which it was done so well that I had to admit to liking it on those particular things but for the most part…ugh.  I absolutely love this But I think you can see where, if done by an amateur like me, it could go oh so wrong.  My solution to this is to run two rows of zigzag stitches over the edges of two overlapped pieces.  I’m not convinced this is the best solution but I want it to lay flat and this is the best I’ve come up with so far.

Scarf pieces pinned on.  See all that extra fabric on the back of my neck.  Appearantly there is a reason hoods are shaped the way they are.

Pin and trim to make room for….the place where my neck and back come together….is there a word for that?

I mailed it to my sister.  I’ll post pictures if she sends one.

Update: here she is! 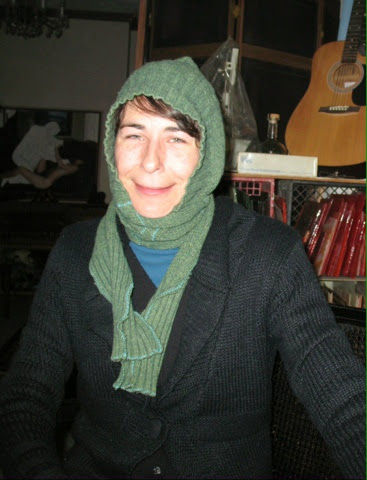 Documenting all the silliness on the road to glorious imperfection

Documenting all the silliness on the road to glorious imperfection

4 kids in 3 years: reflections on motherhood, art and life.

tales of a wayward mama